I stepped off the bus and ran up to Saleema to say hello – what a wonderful moment – like seeing an old friend, even though I’d only met her once before. Before I knew it, several of my younger students came running up to me, giggling and calling my name, “Su-see, Su-see!” and hugged me real tight.

We were visiting Chettipunyam, the colony where I danced to Justin Bieber with Saleema and Das. So far it was my favorite colony (don’t tell anyone I’m picking favorites) and it was only about to become a more favorite. I didn’t know why some of my students were home on a random Thursday, but I found out a little bit later from Saleema that it was because their father/uncle had died of a heart attack. The oldest son, Daniel, is 10, so the father was very young – so devastating to the family, especially the wife who had just had another baby.

Nevertheless, the kids were all very excited to show me their home. I’ll be honest… I was excited to see it. It’s so nice to see where these kids come from. As we walked down the path to their house, I asked Keerthika Devi how she was. In America everyone says, “I’m good,” but here the norm is, “I’m fine, thank you.” She said just that with a big smile, then suddenly got distracted by something like all 1st graders do and she ran off with Dharshika, a UKG girl. I was left with Daniel holding my hand. I looked down at him and asked him how he was.

“I’m WONDERFUL,” he said. How does he know that word? I thought to myself. Then I remembered: on the first day I ever taught 4th STD I taught them the word wonderful. I taught them that it means very super, very excited, very happy. Daniel remembered that small minute or two of me teaching them a new word, and here he was, almost three months later, three days after his father passed away, and he is holding my hand, smiling, telling me he is wonderful. That was wonderful. I’ve been having a harder time lately and that moment touched my heart profoundly – not only because he was saying this so soon after such a tragic event, but because it was evidence that these kids are listening – even if it’s only one or two a day, and it’s something as small as a happy new word such as wonderful. I wasn’t doing nothing.

“Oh good! You learned that from me, didn’t you?” I said with a smile. He looked at me with a face of someone who had accomplished something great. “Yes I did! How are you?” Earlier I had said I was fine to Keerthika Devi, but now I took a second and could honestly say, “You know what – I am wonderful as well.”

I saw their home and met their mother and aunt, and after we did crafts and I painted their fingernails. We found some blue glitter in the craft box and I put it on the girls’ eyelids to make them feel extra beautiful. Tender moments. I loved that although all of these kids go to school and are getting a good education, they still love Das like a brother despite his dirty clothes and lack of education. Love holds no bounds for these children, because they used to be there (I am also curious as to why Das doesn’t go to school… he’s 7 years old and all the other kids in the colony go to school except him). After a bit we headed back to the community hall (which is just a one-room building that Rising Star volunteers built for them in years past) and on the way I wanted to stop and say hello to a woman I had met last time. Her name is Maria; she has no hands or feet but can dress her own wounds. She told us she had lost a son and shed some tears over it. I wanted to visit her and see how she was doing. The second I came to her door and sat next to her she fell onto me and started crying. She was dirty and her hair was greasy but I kissed her head anyway. She sobbed for a bit while I tried to soothe her suffering by simply holding her. One of the translators came looking for me (by the kids’ request) and he found me with Maria. She cried out to him in Tamil and when she lifted her arms and waved them rapidly I can only assume she said “I have no hands,” she gestured to her feet, “I have no feet,” she lifted her skirt to show some of her ulcers, “I have open wounds and pain!” She did some other gestures and pounded on her heart, still speaking in Tamil, and when she looked to the heavens and shook her arms with tears streaming down her face it was clear she was crying out, “Why? Why has my God done this to me??” The anguish was so powerful. The translator talked to her for a bit, and later he explained to me more of what she was saying. Turns out she hadn’t lost just one, but all four of her sons to sudden illness or accidents and this man who had just died from a heart attack was her grandson. She hasn’t had any food or drink since he passed away (three days) and Rex told me that she said if she could walk, she would jump in front of a train – that she wishes to move on and be done with this life. And really… who could blame her?

I returned to the community hall. Already I’d had urges to cry of who knows what emotion more than a few times. When I walked in, everyone was in there mingling. Games were out; kids were playing Jenga, catch, drawing, talking, etc. Every single person in the room was smiling and the sun was shining in through the windows (not actually glass windows, just cut outs in the wall). I talked to Saleema for a bit, and she shared her excitement about her niece getting married this January and told me to come to the wedding. She also told me she was the grandmother of Sanjeevini, the 1st STD girl I talked about in my last post. She said I could call her “mummy” and asked me how Moosa is doing, a 4th STD boy who recently had heart surgery that I spend a good amount of time with in medical while he’s recovering. Everything she said was gracious thanks; what a blessing that my niece is getting married, thanks to God for my wonderful family, praise to God for the success of Moosa’s surgery – attributing every good thing in life to God. She’s not wrong; every good thing in life does come from God, and this moment was good, so I thought to myself, Thank you, dear God, for putting me right here right now.

There was so much joy in that room that day. It was overflowing. I brought my speaker and we played cheery music in the background. The littlest sister, Sindu Jensey, drew a “henna” on my hand with a pen and was so proud of it. Dharshika got into the first aid kit and found the latex gloves… instead of trying to keep the kids away from that stuff like we usually would, we started blowing the gloves up like balloons. How excited those kids were to a] have balloons, b] have the balloons come from something they weren’t expecting and c] have the balloons HAVE FINGERS!! There were so many priceless moments shared that day. It was wonderful.

I got on the bus and wanted to start crying. My insides were overwhelmed with a roller coaster of so many different emotions – I felt like I was going to explode… or I don’t know, maybe counterintuitively implode. Today I had experienced excitement, tragedy, worth, awe, encouragement, inspiration, harsh reality, creativity, intrigue, beauty, simplicity, responsibility, curiosity, pain, heartbreak, shock, empathy, relief, fun, laughter, sharing, gratitude, positivity, genuine love and pure joy.

It all goes to show that these people are fully human. They experience all the same emotions that we do, they’re just in a different location and physical situation. So often people will say, “Oh these people have nothing, yet they are so happy.” Often, this is true**, as shown in the community hall. But guess what – they still experience grief and pain. The mother was in mourning and the grandmother was in such a deep depression that she wanted to commit suicide. She has nothing (in our terms), and she is not happy. People see the happy ones; they’re the ones that come out to socialize and meet us. They don’t see the ones who hide away from the world and are hurt and struggling to keep afloat in life; I do. Everyone is human, and no one is exempt from the trials and sufferings of life.

**It’s starting to bother me when people say they have nothing. They don’t have nothing; they have everything. Okay, maybe not everything. Indeed there are extreme struggles, sometimes they don’t have food or shoes or clothes, they’re abused, their houses are falling to pieces – this is hard. But the fact of the matter is that they don’t need what we Americans consider “necessary,” they don’t need dishwashers and laundry machines and showers and a room full of fancy clothes. For the life they lead, they have what they need. If I were to try to live in Provo, UT without a toilet, that obviously would be a problem. But here it’s not necessary. They have less than us, but they don’t have nothing; they just don’t have the unnecessary. 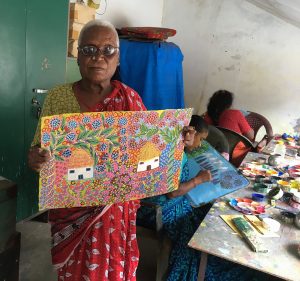 One of the colonies has established an art school for those affected by leprosy in the colonies. It’s actually incredible what these people can do. This is a painting I bought with the artist. Notice her hands. Yes, that’s right. This extraordinary painting was done by a woman who is lacking full fingers.
*** 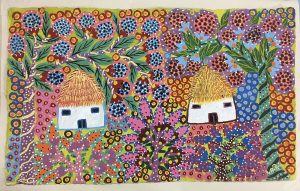 Later that day I paid a visit to the medical center. If I haven’t already said this, one of my sweet 4th STD boys had heart surgery a couple weeks ago and is recovering in medical until he is cleared to go back to school. I try to go over there to spend time with him, so this time I went over with Jenga and a coloring book. Other kids there obviously joined in. We had a blast. 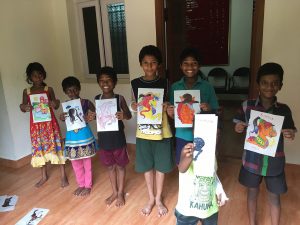