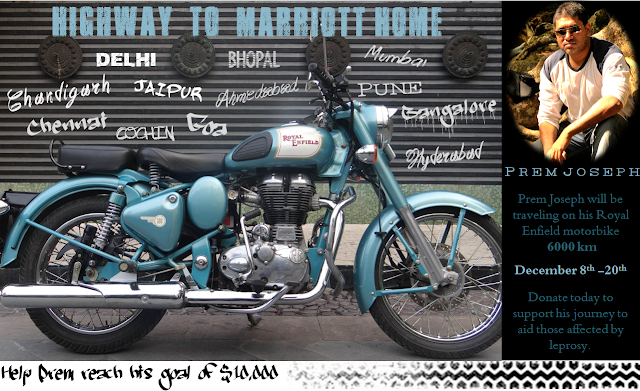 Prem Joseph, the Director of Sales and Marketing, Hyderabad Marriott Hotel & Convention Centre & Courtyard by Marriott, Hyderabad, will start a journey traveling across India on his Royal Enfield motorbike.  Prem will travel to all operating Marriott hotels in the country between December 8th – 20th , 2013 to collect gift-able stay vouchers from the hotels.
At the end of his 6000 km journey, 50% of the vouchers will be auctioned and the proceeds will go towards Rising Star Outreach of India which is fondly called as Marriott Home by the Marriott Team. The Marriott Home is an initiative by Marriott Hotels to raise funds for children whose parents are affected by leprosy. The funds raised would be given to Rising Star Outreach of India by a group of Royal Enfield riders joined by Ankush Sharma, General Manager, Courtyard by Marriott, Chennai.   What a site to see!
Prem travel across , Delhi Jaipur, , Ahmedabad, Mumbai, Pune, Goa, , , Chennai and .
We thank the Prem Joseph and the entire Marriott family for the love and support that they show towards our kids, their families and communities.  The Marriott often invites groups of the Rising Star children to the hotel for education classes and lunch or coming out to the campus to play a cricket match.  Ankush and his team are continually looking to different avenues that they can serve those affected by leprosy.