A sea of over 1,000 hands swaying to the same beat; A gathering of over 500 strangers uniting for one cause; 400 instruments in a school for leprosy-affected kids in India; A group of war-affected kids in the Congo now receiving music therapy. This is what I live for; this is why I founded YouthJamz, youth helping youth through music.

Three years ago, I combined two of my greatest passions, music and philanthropy, with the dream of providing music education to underprivileged children locally and around the world. With YouthJamz, I throw an annual benefit concert to raise proceeds to establish and fund music education programs. Since 2010, YouthJamz has raised over $10,000 to start and support music programs for approximately 800 children in San Diego, India and the Congo. 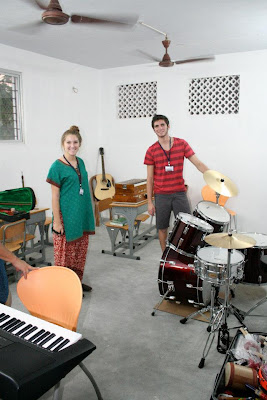 This last January, I had the pleasure of personally traveling to India with Rising Star Outreach to bring over 300 musical instruments to their school. All of the instruments were purchased with proceeds from our 2012 benefit concert with the vision of establishing a music program for the children. Before arriving in India, I knew that I was in for an adventure, but nothing could prepare me for the incredible, life-changing journey that I was about to embark on. As soon as I stepped off the plane in Delhi, there was something new and unbelievable everywhere I looked! The first aspect of India that I noticed was the immense poverty. I had been expecting to encounter some form of it, but I never could have imagined what I saw. There were people with polio begging for money in the middle of highways, trash piled up past our ankles and men bathing in and drinking from the same gutter.

After the first day in Delhi, I went to bed in a somber mood because of the all the overwhelming examples of poverty I had seen in just one day. It wasn’t until a few days had passed of touring Delhi and Agra that I realized what it was that made India such a beautiful country; its people and its culture. After speaking with many of the Indian people, I learned that although they are exposed to devastating poverty, their genuinity, humility and happiness overcame it. The leprosy patients that I had the pleasure of meeting and treating with Rising Star’s medical team in villages around Chennai were the most inspirational examples of this unconditional happiness that is embraced in India. These incredible people have almost nothing to their names and are shunned by the rest of society, yet many of the patients that I spoke to were completely content with their lives! Some explained to me that they believe that God has a plan for them, so they will make the best of the lives they have been given. It was incredible to see that many continued to pursue what they loved despite their disabilities. Be it carpet making, stone cutting or painting, everyone took immense pride in their work and didn’t allow their income or even health to limit them! Treating these patients and witnessing their smiles, love, and gratitude was the most rewarding and inspirational thing I have ever done. 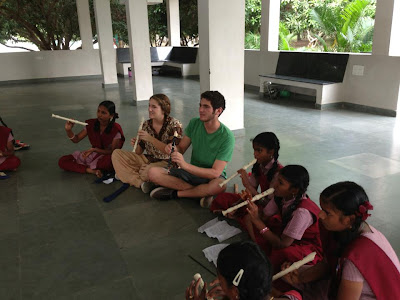 The children that we taught music to at Rising Star’s school was a story of their own! I have never before seen more energetic, playful, determined, or loving children in my life. The first little boy I met, Veera, sprinted up to me as soon as I arrived with my family and asked me with wide eyes, “Uncle?” I responded with a nod and a smile, and he instantly lit up, grabbing my hand and dragging me over to the playground to play tag. From that point on, I knew that the school was a home for
me. 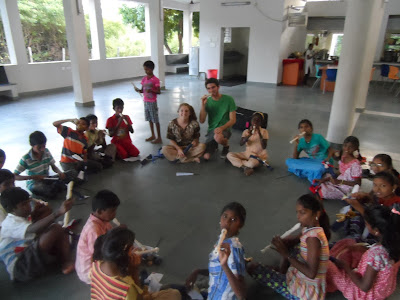 As soon as we told the kids that we had brought them musical instruments, they were ecstatic. I guess that the dream of being a rock star is universal! My sister, Jenna, and I started off our music program by teaching each of the grade levels basic recorder lessons, which turned out to be the loudest and funniest sight I have ever seen. Although the youngest groups’ lessons only resulted in a cacophony of sound, the older kids were incredible intelligent and picked up playing the instruments really quickly! We even had the chance to give some of the oldest students guitar, piano, and drum lessons, with the hopes of having them then teach the younger kids. 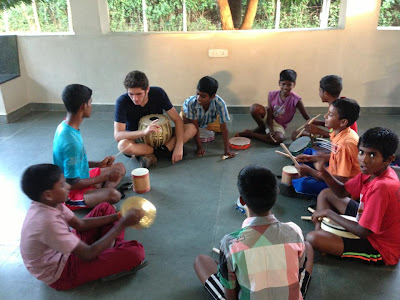 One of the oldest boys, Deepinraj, insisted on having me teach him how to play a full drum kit instead of only bongos, and after a couple hours of instruction, he was playing “Back in Black” as if he had known it for years! I just recently sent him a beginner drum lesson book and I will be making him a drum lesson DVD so that he can continue learning and loving music. After seeing the joy we brought to the kids with the instruments, I have high hopes for the music program at Rising Star. After falling in love with the kids at the school and the country of India itself, I started to sponsor one of the boys I became friends with, Saranraj, and hope to visit again as soon as I can! 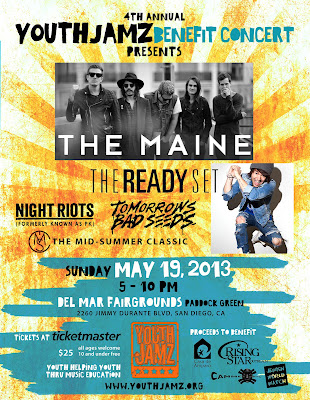 This year’s concert will be on May 19th at the Del Mar Fairgrounds and should be our biggest one yet! The Maine, The Ready Set, Night Riots, Tomorrows Bad Seeds, and The Mid-Summer Classic will be performing and tickets will only be $25 dollars. Volunteers from Rising Star will be speaking at the event and we would love to have support from anyone in the San Diego area. If you can’t make it to the event, it would be amazing if you could donate to the cause at www.crowdrise.com/
YouthJamz. Working with Rising Star Outreach has been the greatest adventure of my life. The kids in India truly changed my life and now I hope that we can help change theirs by continuing to give them the gift of music!