Running with a Purpose

Michael Sauer is a native of Wenatchee, Washington. He recently graduated from Brigham Young University with a BS in Biochemistry and a minor in music. Michael is currently preparing for medical school. He went to India with Rising Star Outreach as a medical coordinator in the summer of 2015, and enjoyed every minute of it. He frequently tells people that his summer with Rising Star permanently changed him for the better, and it molded him into a better and more mature man. One of Michael’s favorite things about India was the kindness and humility of the people. When he’s not training for a marathon, Michael enjoys playing the piano, learning about the sciences, and absorbing the beauty of nature.

Some of my most cherished memories from India involve being swarmed by gentle hands and eager eyes as I told bedtime stories of my life and adventures back in America. Surprisingly, one of their favorite stories to hear was how I had ran a 45 kilometer race (a marathon) in the pouring, frigid rain with 4o C (38o F) temperatures just three days before I stepped on the plane to meet them in India.

During one story time, I told the boys I was training for one of the world’s largest races, the Boston Marathon. It would have thousands participants, hundreds of thousands of spectators, and some of the fastest runners in the world. I told them about how the winner would receive more than 50 lakhs ($150,000). Although I assured them I wasn’t planning to win, the boys would fantasize about me clinching the race, shouting each of their names to the crowd as I crossed the finish line, and buying all sorts of fancy things with the prize money. At my last story time, the boys confidently told me, “let us know when you win that race.” I was inspired by the confidence they had in me. 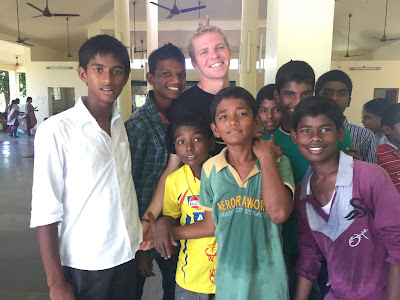 The beginning of my long preparation for Boston started in India, with my morning run of a 32 laps (4 miles) around the black gravel track behind the schoolhouse. By 6:30 in the morning it was already 80 degrees and as humid as a sauna. I would walk out to the track with my dry clothes, and return to the Elephant House as wet as a whale, panting like a dog.

At 7:00AM I would teach piano to Vimalkath, one of the 10th standard students. I wouldn’t have much time to recover from my workout, and would frequently show up still sweaty from my run. In October, I received a letter from Vimal in which he reminisced about our fun time during piano lessons and the goodness of our friendship. At the end of the letter, he said “P.S. Good luck on your marathon race”. As I continued my marathon training, I felt inspired by young fan club on the other side of the world. 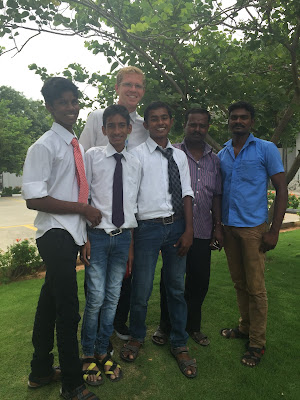 A few weeks before leaving to Boston, the Rising Star office asked if I would like to wear a Rising Star shirt during the marathon. Running a marathon can be just as much of an emotional, spiritual, and psychological experience as it is a physical battle, so it seems natural to expend your energy in the name of something that has personal meaning to you. I felt honored to run for Rising Star’s incredible mission on April 18th. The night before the marathon, I lay awake for hours in my hotel room without showing a sign of sleepiness. It was the night before the most impactful race of my life! At 1:15 a.m., I was still wide awake. As I lie in bed, I shifted my mind among different things that might lull me to sleep. As I did so, I thought about my journey to this point in my running career. I sifted through memories of my half-marathons in high school and my previous two full marathons.

Then, unexpectedly, my memory brought me back to the cement floor in India, listening to the boys gasp as I told them about the Boston Marathon. The moment had finally come. I was soothed as I thought about my small fan club 9,000 miles away. I imagined a reversal of roles in which they were giving me a pre-race pep-talk, telling me about my potential. I thought about their confidence in me, and their desire for me to succeed. As my mind returned to the Indian school grounds, I was soothed to sleep. 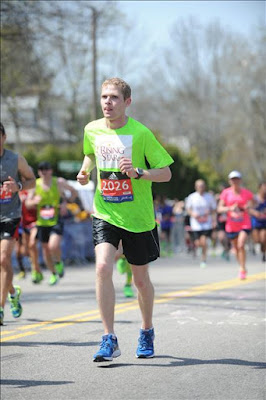 In the morning (after getting 3 ½ hours of sleep), I found myself in Hopkinton, Massachusetts, running toward Boston in a stuffed conglomerate of 30,000 runners. The streets were flanked with cheering locals, several bodies deep on each side, shouting for the legions of strangers conquering a milestone in their lives. As I ran through the torrent of noise, I would frequently hear the words, “Way to go, Rising Star!” or “Let’s hear it for Team Rising Star!” as the spectators read the logo on my shirt. As the heat slowly travelled to my head, my side ache grew in intensity, and my legs became more heavy, I replaced the faces in the crowd with those of my young friends on the other side of the world, dapper in their school uniforms. I could imagine their pure smiles, their small bodies jumping up and down, cheering for me as I struggled through the most difficult three hours of my life.

As I slugged my way up Heartbreak Hill, I tried to imagine the boys confidently pumping their fists, shouting cheers of affirmation. I could imagine my name being yelled with an Indian accent, and I knew that if my young Indian friends were there, their support would be louder than any of the spectators I passed that day. I know that after I collapsed at the finish line, they would have carried me to the medical tent instead of waiting for a wheelchair to roll me there. And if they could have been there to see me, they would have ran by my side for as long as their adolescent legs could carry them. 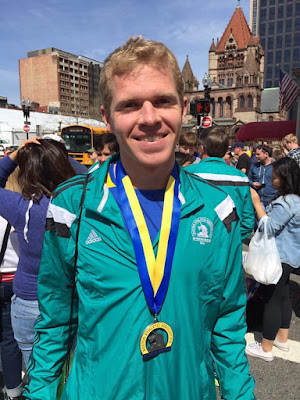 There were thousands of people who read the words “Rising Star Outreach” for the first time as I shuffled through Boston on the morning of April 18th. I hope at least one of them was curious enough to find out why I was so inspired to wear those three words on the front of my shirt. Perhaps it will lead someone sitting on to the same cement floor in India, telling bedtime stories to my young friends. And when that happens, I know their life will be forever changed by their loving hearts, just as I was forever changed by them.