Peace in a World Full of Conflict 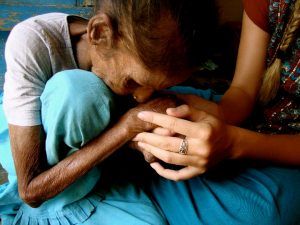 “For three hours tonight, I was happy. I was not anxious. I was not worried. I almost completely forgot that we are living in a world where we face a pandemic. I completely lost myself in service. I was with my chosen family, the people I love and care about. I completely forgot about our new reality. Yes, we worked with a skeleton crew to serve 250 Katie’s Krops meals, and we passed meals through car windows, but the love was still there, perhaps more than it has ever been.” – Katie Stagliano, founder of Katie’s Krops Meals, in her blog entitled, Finding My Peace Through Service

How do we bring peace on earth?

In the past century alone, we’ve seen horrific wars across Europe, two World Wars, wars in Vietnam, Korea, the Philippines, and throughout the South China Sea. Wars and even genocide in Africa, wars in Rwanda and Myanmar, Ukraine, Sudan, Libya, Syria, Yemen, Iraq, Islamic State, Afghanistan, Kurdistan, Ethiopia, Iran, Lebanon, Israel, Congo, Liberia, Angola, Sierra Leone, Cambodia, Ireland, Serbia, Bosnia, Guatemala, El Salvador, Nicaragua, Sri Lanka, Argentina, Mozambique, Laos, Bangladesh, Burundi, Kashmir, Egypt, China, and on and on and on.  I get lost even trying to remember all the wars.  Millions and millions of lives lost. Hundreds of millions of others left shattered with loss.   What is it about peace that is so elusive?

Peace in the nations can only be built and sustained when individuals live in peace.  But even this is difficult.  We have many stresses and pressures: economic, social, family, time, health, to name just a few.  Our politics have become an antithesis to peace. How do we shut out the angry voices, the pressing concerns and the worries that seem to debilitate our quest for peace?

Katie Stagliano continued her article: “No, I don’t think any of us fathomed how the world would change in the past few months. What I do know is that I have found a deep sense of peace as I have thrown myself into service. A smile on the face of a long-time Katie’s Krops dinner guest pulling up to receive a to-go meal on Thursdays brings joy I could have never imagined. Planting seedlings in a garden brings me peace. Sending seeds off to kids across the country fills me with hope. When everything is out of control I have grounded myself, by serving my community and my country. I know that small acts of kindness are magnified in this new world. We can get through this if we come together to serve and be kind to one another.

In my mind I am transported to an oppressively hot, humid night years ago, in Chennai India.  We had had a very pressure-filled day at Rising Star Outreach, the charity I work with in India.  It seemed that everything that could go wrong was going wrong.  Volunteer schedules got mixed up, so transportation got confused. Tempers flared.  Promised medicines, desperately needed to heal a patient in dire circumstances, didn’t arrive.  One of our sweet patients took a very sharp turn for the worse and our doctor regrettably told us she likely wouldn’t make it. I was grieving inside.  Then, on top of it all, late that night, one of our volunteers at Rising Star Outreach had tripped and injured herself. 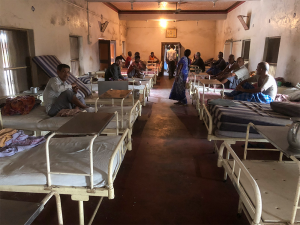 Just to be safe, we took her to the Sri Ramachandra hospital where we take our leprosy patients who need surgery.  We called ahead and Dr. Krishnakanth met us as we were entering the hospital.  He had arranged for our volunteer to be taken for a string of X-rays and other tests.  After determining that our volunteer was alright, he cleared her to go home.  While the nurses were doing the paperwork, Dr. Krishnakanth asked me if I would like to go to the emergency room and see a leprosy patient he had admitted earlier that day, with maggots in his foot.

Dr. Krishnakanth explained to me that the man had shown up that morning.  Dr. Krishnakanth had removed more than 500 maggots from the man’s foot. Then he had soaked the foot in turpentine all day long to draw the remaining maggots out.  He was going now to finish the job

We went to the emergency room and there I saw a man with his leg lifted on a stirrup so the attendant doctor could pull maggots out of his foot. The stench was overwhelming, and I couldn’t help covering my nose. It was also a difficult process to watch. His face was pinched with pain. The doctor explained to the patient that I was the founder of Rising Star Outreach and had come to observe his treatment.  I was surprised to learn that the leprosy patient spoke English.  (Most of our patients speak Tamil or Hindi).

It was pretty disconcerting to see that a good portion of the man’s foot was already eaten away.  I asked him why he had waited so long to come?  His answer surprised me, “No– only yesterday I saw the first maggot head break through the skin of my toe.  I knew what it was, and I was scared to death.  I live in Bangalore (about four hours away by train). I tried going to a hospital in Bangalore, but when they realized I was a leprosy patient they violently drove me out.  I tried several hospitals—all with the same results.  At one hospital, they even beat me for having the audacity to try to get in.  I was becoming frantic.  Already I could see that my foot was beginning to be eaten away. With indescribable fear, I realized that I was literally being eaten alive.  It is impossible to describe how terrifying that is!

“After being turned away from the final hospital I felt hopeless and despondent. I felt helpless to stop this terrible thing that was happening to me.  I was so frightened!  I put my head in my hands and began to wail loudly. Another leprosy-afflicted person came out of the shadows and told me that she had heard there was a group in Chennai called Rising Star Outreach that could help me, if I could only get there.

“So, I wrapped my foot in an old shirt and managed to get a ticket on the train to Chennai. Because of the smell of my wound, the other passengers in my railcar all moved to another train car.  I was afraid I would be thrown off the train, and I began praying to my family’s God with all the fervor of my heart. Like a miracle, no one else came into my car.

When I arrived in Chennai, I found a leprosy-affected beggar on the streets who directed me to Rising Star Outreach.” There was a break in his voice.  He continued, “Madam, I am so grateful!” 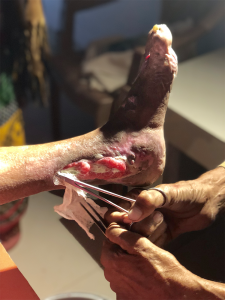 Our doctor continued to work on the afflicted foot.  I watched as dozens more maggots were teased out with his tweezers.  It was a painful process, but finally, with an exhausted sigh, the doctor declared he was done. The foot was bloodied, and the edge of the wound was jagged and torn.  The maggots were squirming and wiggling in convoluted mass in a bottle the doctor had put down.

At that point, the suffering man, very soberly gave me the Hindu salute with both hands folded under his chin.  He had tears in his eyes and his voice was quivering: “I salute you, madam, in the name of my wife, my family and my Gods.  You have saved my life.”  At that, he wept uncontrollably.

It brought tears to my own eyes and as I left to go back to my van with our now released volunteer, I was amazed at the sense of absolute peace that descended upon me.  I felt the love of God casting a warmth into my whole being. I thought to myself, “I love what I do!  How blessed am I to have this incredible opportunityto help a poor leprosy patient, rejected and all alone? How blessed am I to have been given this moment of absolute heavenly peace!”  It felt so healing.  It felt so complete. I felt bathed in love.

So, I am in complete agreement with Katie Stagliano. Through service, we can all feel peace. It comes not through intellectually seeking it, but rather through the simple act of serving.

The good news is that we don’t have to travel halfway around the world to India to serve. There is an elderly widow in your neighborhood who would love a visit, I’m sure.  I’m also sure there are some youth who are feeling that they don’t fit in, that they are not wanted. There’s probably a single mom or dad, overwhelmed and feeling very alone, in spite of all the demands of a growing family—in fact, maybe because of the demands of a growing family!  There is something for each of us to do.  It doesn’t have to be big or spectacular.  It just needs to be offered with love.

This post has been adapted from an article written by Becky Douglas for Meridian Magazine. The original article can be found, here