From the Colony: Mr. Palanisamy 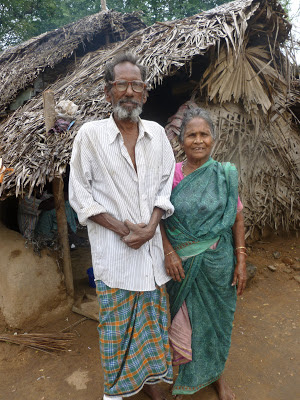 Mr. Palanisamy is always the first person to greet our volunteer groups as we come into Wallajabad. He sits and waits on his old tattered cot in front of his home; the first, and best fortified building along the single street of Wallajabad, the poorest colony we visit in India.

He has the clearest view of the church where we set up clinic and the gate which we enter. This morning we heard him yelling “vanakkam” to us before we even got out of our car. I was surprised to find him peeking through his thatched roof since there was heavy rain this morning. I knew it was him immediately because of his toothless smile and foggy glasses. He is notorious for lingering after treatment and watching us work, as a result he is often the star of our photos for the day, which I think he secretly enjoys, even though he does not openly express his excitement.

Prior to living in the leprosy colony he was a cloth-weaver. When he was about to turn 50 he noticed that he had a ring of wrinkles forming in the middle of his forearm. This unique type of rash was known in the community as the first stage of leprosy, so the diagnosis was no surprise to him. Palanisamy was soon diagnosed after this discovery and left to Wallajabad with his family. He continued to work on clothes until the disease took most of his fingers and toes and was no longer able to work. Fortunately, he is one of the few leprosy-affected people who has received pension from the government, Rs.1000 month ($20 US dollars) which is sufficient for him to survive without work.

Palanisamy has not left the colony since his arrival twenty years ago because he fears social oppression. He sees himself as a burden to the outside communities and does not want to trouble them. However, he has had many visitors to his colony over the years, and is very content there with his family. Palanisamy says that he is beginning to see a change around him in the upcoming generations. He is afraid to leave the colony, but his grandchildren  play with the neighboring communities, which was unheard of when he was growing up. He is happy to see these changes for his family. 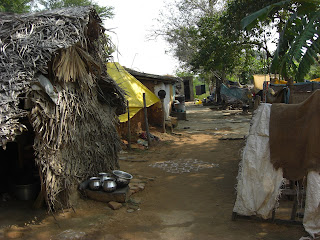 Mr. Palanisamy is currently cured from leprosy and only deals with the long term complications such as ulcers. He has become functional without his fingers and toes and has not dealt with the paralysis often associated with his condition. Rising Star Outreach has assisted him in many ways throughout the past several years. They help him with his daily pains and ulcers by providing bimonthly visits and medicines. He says he feels that this is the most helpful because without Rising Star, his ulcers would become too overwhelming.

Rising Star Outreach has also helped his colony by providing micro-loans for cows and goats. With the help of the micro-loans, they have been able to sell the milk and make some money for themselves. He says he is very grateful for the work being done to help him and his community and feels that he would be lost without it.