A Letter from the Chairman 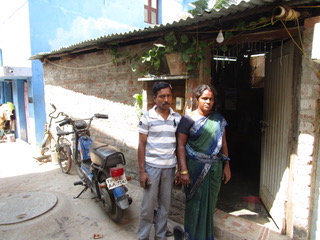 Our National Director, Dr. Susan, was surprised by a visit yesterday from one of our leprosy patients who lives in the Villivaakam Leprosy Colony. Mr. E. Ganesen came to bring a heartfelt thank you note.

His colony was the hardest hit during the terrible Monsoon floods last year. His home was nearly completely destroyed. Due to the generosity of our sponsors enough money was donated to renovate his home, but we quickly ran into problems. The contractor demanded a major portion of the cost before starting the work. Once the workers came, however, and realized they were going to be working in a leprosy colony, they refused to do the job. The contractor refused to return the money.

Mr. Ganesen is a very enterprising person. He has already taken micro-loans to create a business. He is an excellent electrician. He’s currently repaying his fourth loan. Each loan has enabled him to make his business more sophisticated.

With the standstill on the reconstruction of his home, he was desperate to have a place for his family to live. He told us that the belief and trust Rising Star has showed him gave him the confidence of using his talents to help the situation out. He stepped up to the plate and began to do the reconstruction work himself. He ended up doing such a wonderful job that others are interested in him helping them. He’s now creating a new business—General Contractor!

His 11-year-old son, Adhityan had also had a tragedy this last year. His ear was torn off in an auto accident. Our medical program paid for reconstructive plastic surgery and he’s fine. Ganesen wants to start a youth group in his colony with the patronage of Rising Star Outreach. This man is a leader in the making!

These are the stories that help us realize that every penny we raise here in the States can make a significant difference in the lives of leprosy-affected people across the world seeking for the chance to raise their families in dignity. It also makes us realize how much we appreciate the never-tiring efforts of our leaders in India, and the tremendous generosity and trust of our donors in America. Thanks to each of you for your wonderful support! It is making a difference!!
– Becky Douglas 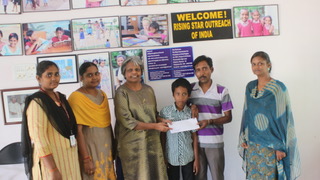