We decided to take this #TBT to look back on session 4 with Lon Young and the Community Outreach rotation. Lon’s story goes straight to the heart, and we thought you’d love it as much as we did.

We’re hot and sweaty, and we haven’t even arrived at the construction site yet. Our driver has cut the engine while we wait for a train which is taking so long we’re beginning to think of trains as hypothetical constructs. There’s no air-conditioning and no breeze coming through our open windows, but somehow our volunteers are all smiles. This morning they’re heading to Bharathapuram to help out with a latrine-building project. They’ve been to this colony a few times
before on the Community Outreach rotation, but this will be their last day before their session’s over. There are more glamorous jobs at Rising Star Outreach. I’m curious how the volunteers have felt about spending one out of every three days coming out here, digging trenches, hauling bricks, sifting sand, and mixing mortar for leprosy-affected villagers for whom making the long trek to a community toilet is next to impossible. 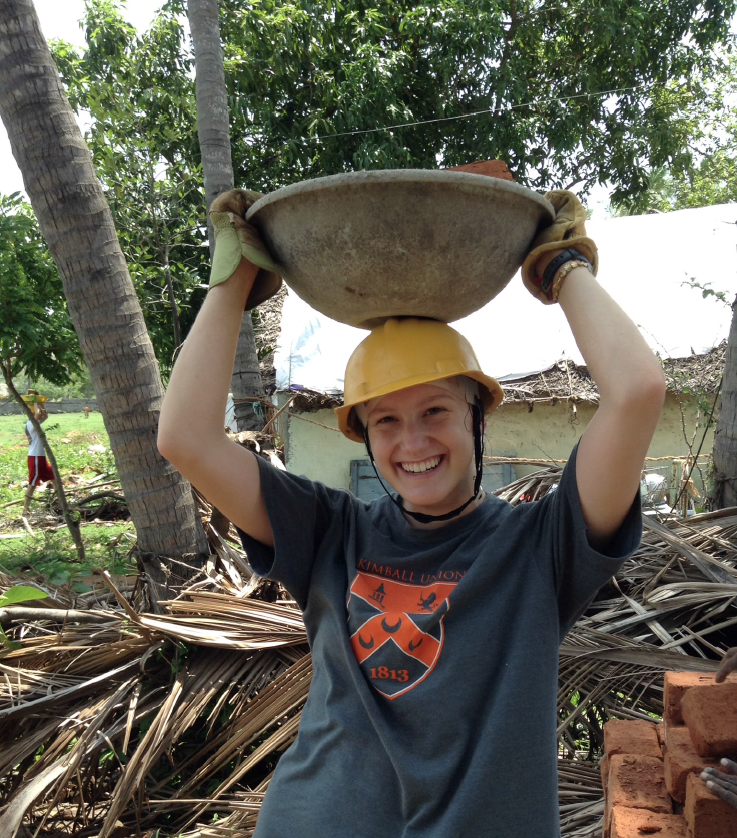 Erika Madrian, who’s going to be a senior at Kimball Union Academy in New Hampshire in a few weeks, explains that she has really enjoyed doing medical and educational rotations, but that construction projects “offer a kind of instant gratification. You can physically see the difference you’re making for the colony.” Jocelyn Jones agrees. “It’s nice to see immediate results,” she adds. “It’s a chance to show the people of India that we love them and care about them.” 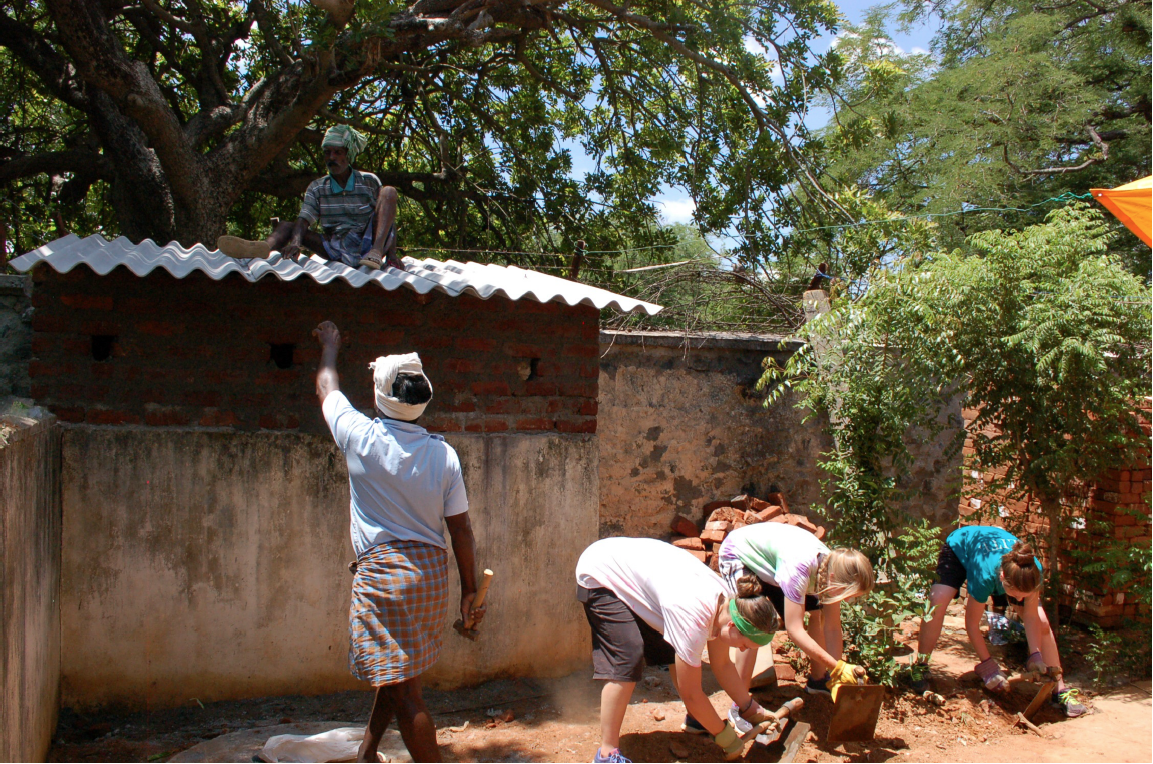 But what about the heat? Wouldn’t they rather be sipping milkshakes in the shade? “No way,” says Amber Cameron, from Pocatello, Idaho, who swears she likes the hard work and sweating. “It cleanses the soul!” she says. If you could see her beaming as she says this, you’d know she isn’t kidding. On the subject of heat, Adam Jones, aged 12, pipes up, “Even thought it’s hot, it’s fun if you make it fun.” 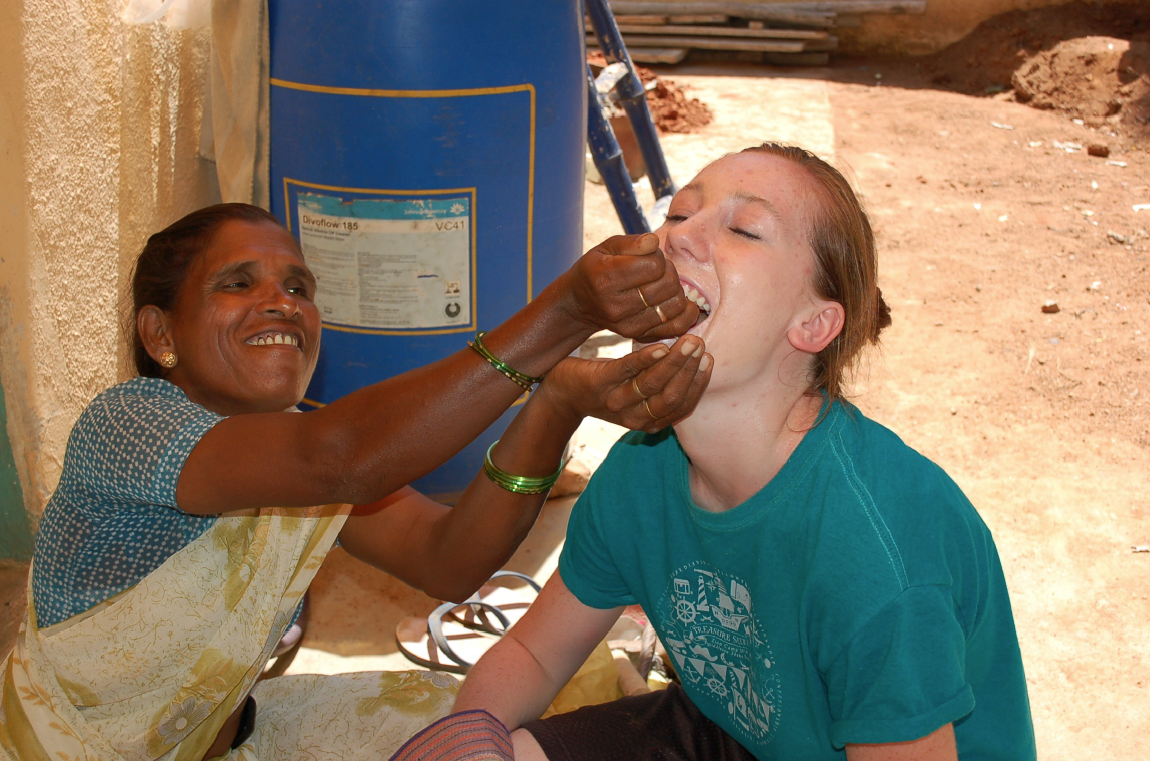 The train finally rumbles past. Soon a barefoot crossing guard begins cranking a set of gears that raises the guard rail. At once, a damned-up river of rickshaws, scooters, bicycles, and pedestrians begins to flow out across the tracks. Our driver fires up the van, and we’re lurching forward again, just ten minutes from the colony.

Over the drone of the engine, several more people share what makes the building projects meaningful to them. For Hillary Flinders, it’s the personal connections. “I like working alongside the people we’re helping,” she says. “You can see their faces light up because you were there to help them.” It’s a sentiment shared by Jordan Harline, from Colorado Springs, who speaks of
the joy in “being able to interact with the people we’re serving.”
I’ve been watching this group for the last two weeks. It’s true about the connections. I’ve seen them practicing how to pronounce the names of the villagers, listening, laughing, snapping selfies. I’ve seen them put down a shovel and sit in the shade with women who are proud to show pictures of their son or their daughter, off to college. I’ve seen them chomping grains of uncooked rice that were poured into their mouths by gracious hosts who wanted to offer their
hard-working guests the only treat they had. I’ve seen these volunteers say good morning to strangers and after a day of digging, hauling, and stacking, say good afternoon to friends. We’re pulling into the colony now. All this talk about altruistic motivation can get a little stuffy. So I ask Zack, the youngest of the Jones family here from Pocatello, to weigh in.
“Hey Zack,” I ask, “What’s this Community Outreach Rotation thing all about?”
Zack is eight, and that’s how many syllables it takes for him to answer.
“They don’t pay you. It just feels good.”
–Lon Young
India Volunteer Director