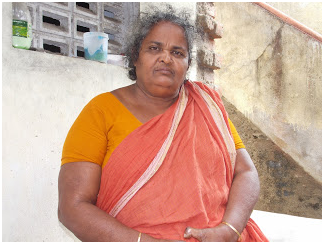 Mumtaj was born in Ramanthapuram District.  At the age of 5 she was diagnosed with leprosy and began treatment in the Karigi Hospital by a mobile medical clinic hosted by German volunteers.  There includes one other member of her family who also has been affected with leprosy, her father’s uncle.  In 1971, at the age of 16, Mumtaj was arranged to be married to her husband and to show respect and love for her new husband, a Muslim, Mumtaj, a Hindu, converted to Islam.  They both moved out of the government leprosy home where they met each other – a home where they received their nutrition, medical care, basic needs, and government pensions – into the Ramanthapuram District leprosy colony.  The government leprosy home was Mumtaj’s home for 18 years.  But they needed to move out after they were married because non-affected leprosy people cannot reside in the home.  Many leprosy colony families live in the colonies because they are family friendly.  In the colonies, it is permitted to have your family live with you no matter their status of leprosy.  Mumtaj and her husband were blessed with a daughter.  Mumtaj has two grandchildren.  Her daughter, two grandchildren, and son-in-law live far away from the colony, and sadly, her husband passed away 8 years ago.
Mumtaj is 62 years old and has been a resident of the Chettipuniyam colony for 20 years.  Her mobility is limited, she has no restroom in her house, and she has no income or support other than the medical support provided by Rising Star Outreach Medical Team and the financial assistance provided by the government.  This colony does not have a communal bathroom but is currently undergoing the process of receiving one with the help of Rising Star Outreach.
For more information on Kaylee’s interview with Mumtaj please visit her blog.