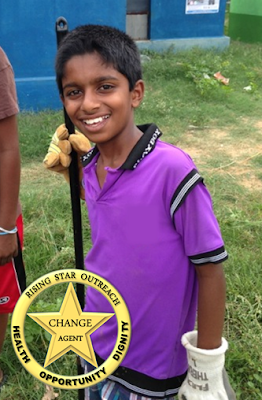 Ebenezer is a small boy from 6th standard, although he is small in stature he is big in heart. Just a few weeks ago the older boys at Rising Star Outreach had a service project.  This service project included: planting trees, cleaning up trash and repaired numerous items at a local government school.

Ebenezer was given the job of digging holes and softening the dirt for planting the trees, and he worked diligently the whole day. I never heard a single complaint from him even though I could see his small figure struggling to keep up with the other boys (he was by far the youngest and smallest) and he pushed through, even managing to stop and smile for a photo.

The next day as I walked through the school I saw Ebenezer was sitting in the medical clinic. When I asked him why he was there he told me “my arms are so paining,” this sweet boy had never had sore muscles before in his life and thought he was sick. When I tried to explain what was wrong with his arms his eyes grew big, smiles and says “my muscles are getting bigger.”

His diligence and sense of humor are ones that make me proud to say that he is a Rising Star student.