REPORT FROM OUR NEWEST BOARD MEMBER, LARRY PRESSLER 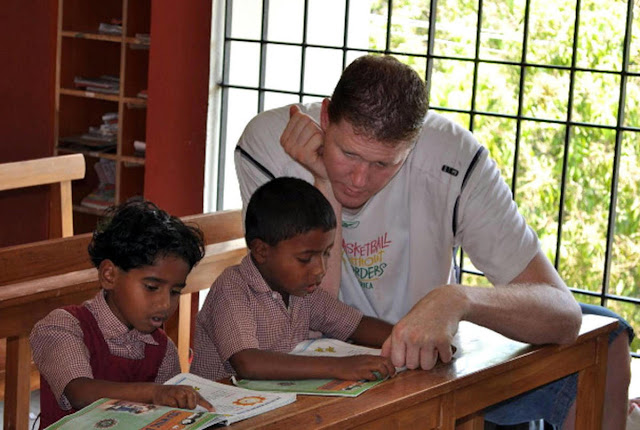 This column is a report from India, where I have just finished touring my book, “Neighbors in Arms: An American Senator’s Quest for Disarmament in a Nuclear Subcontinent.” While I was there, Mahatma Gandhi’s birthday, a national holiday, came around. I decided to take the holiday to visit Rising Star Outreach — a charity that helps leprosy-affected people near Chennai in the south of India. There it operates a secondary school to help children with leprosy.

Rising Star’s Peery Matriculation Higher Secondary School actually serves more than leprosy-affected students. Students who have leprosy-affected people in their families are treated as if they themselves suffer from the disease, so the school must serve a very wide community.

It also has a mobile clinic and a medical team that goes to 13 leprosy colonies around Chennai and the rest of India. Chennai has severe pockets of poverty with almost medieval quality of life. There I met with Dr. Susan Hilton, a native who runs almost the whole operation. In the United States, Rebecca Douglas is the founder and president. The charity has a U.S. base in Provo, Utah, and anyone who wishes to donate to it can find out more at Rising Star Outreach’s website.

I was amazed at the progress many of the children make. They presented us with a classical dance performed by the young men and women. They have science and math labs that will prepare them for entering the workforce. I also saw some hopeless cases of people with destroyed limbs and facial features. It was a gut-wrenching experience but one I needed. I have been going to India for almost 45 years, either as a member of the Foreign Relations Committee of the U.S. Senate, as a teacher or just as a man visiting friends. This visit to the Rising Star Outreach campus was the most poignant, startling and maybe refreshing visit I have had. My problems seem minuscule after seeing theirs — I have not faced any challenge anywhere near what they face.

There are many similar leprosy centers run by Rising Star associates across India. It is hard to believe leprosy is still a problem in today’s world. What happens is that once someone is in a family with anyone associated with leprosy, even if they are recovered, they are branded as lepers and forever outcasts. They cannot marry into anything except another family with leprosy, and they have no jobs and cannot get out. Thus, for many centuries, leprosy has continued, from the time of Christ onward.

I have just been honored to have a seat on the board of advisors of Rising Star Outreach, and I will be attending my first meeting this weekend at Lake Winnipesaukee in New Hampshire. I am very glad this volunteer opportunity has come to this 75-year-old. We have several needs in our own country, and I will do what I can wherever. This leprosy-related work has an edge or a poignancy to it that makes me want to serve my fellow man and God even more.

The main purpose of my trip to India was to do a book tour with my Indian publisher, Penguin. But the chief result personally was my eye-opening visit to Rising Star Outreach’s school and colony. It has far exceeded any event in my life recently.

This article first appeared in Deseret News on October 16, 2017
https://www.deseretnews.com/article/865691188/A-leprosy-related-visit-in-South-India-refocused-me.html

Sen. Larry Pressler was a U.S. senator for 18 years and congressman for four years. He is a Rhodes Scholar, Harvard Law graduate and a Vietnam veteran.