The Magical Power of Loving Touch 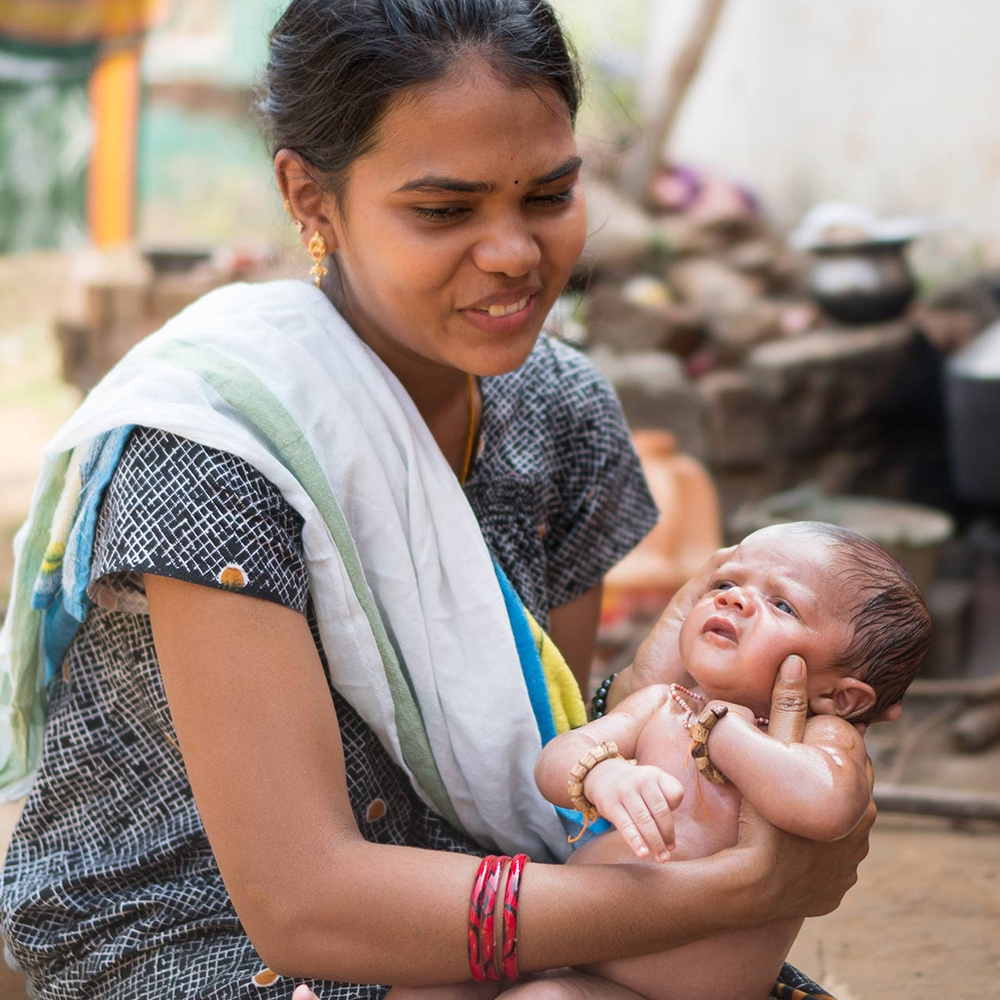 I saw a remarkable documentary about Mother Teresa years ago. One of the scenes in the documentary showed her Missionaries of Mercy going into Beirut, Lebanon during a bombing siege, to rescue babies in an orphanage.  When they arrived at the orphanage, the babies were in trauma from the bombing all around them—most of them contracted into tight balls, shaking, with their eyes rolled up into their heads.  Upon arriving, Immediately the nuns began stroking them from the tops of their heads to their toes.

A few minutes later when the camera cut back to the babies the change was truly miraculous.  They had relaxed and uncurled. They were smiling.  It was such a stark contrast I could hardly believe my eyes.  The workers in the orphanage also expressed disbelief at the miraculous change that had come to the children in a few short minutes.

That was my first introduction to the power of touch. I have seen this same power manifested over and over again in our work in India.

I remember Elder Stephen Covey suggesting in one of his books that as a parent, if you needed to correct a child, you should touch them very gently on the arm.  Why?  Because it is nearly impossible to yell at a child if you are touching them lightly. That simple touch seems to calm the raging beast within that we often struggle against when we’re exasperated with a child.

I have seen touch break down barriers, comfort nearly inconsolable grief, and help to control pain.

One hot, dusty day in the Valajabad leprosy colony this power was manifested to me, once again.  We had brought a team of volunteers to help build a goat shed for the families in this colony who were wanting to raise goats as a colony micro-business.

The Valajabad Colony is one of our most challenging colonies.  The main reason for this is that they don’t own the land their houses are on; they are basically squatters.  Consequently, it’s nearly impossible for us to get services for them.  Of greatest concern is the lack of water.  There is only one well for the entire colony of 30 families.  The well only typically has water two days a week.  But even that is not a constant.  There are times when there is no water at all for weeks on end.

Without water it is impossible to boil rice, the mainstay of all Indian diets.  Food has to be eaten raw.  The cooking pots cannot be cleaned, nor can the dishes be washed, clothes washed, or bodies washed. Consequently, food poisoning becomes a constant threat to health.  Leprosy wounds cannot be cleaned out.  Without water, life is nearly impossible.

The houses in this colony are nothing more than mud huts with either tin or straw roofs. Upon arriving in the colony this particular day, there was quite a commotion at one home.  Upon approaching the home, I saw what the problem was.  A large snake was slithering into a hole in the mud wall of the home.  Several women were trying to pull it out with sticks, but with no fingers and in some cases, no hands, their task looked to be impossible.

One woman saw me and screamed “cobra!”.  I have to confess, I have a crazy fear of snakes.  Much as I wanted to rush forward to help (After all, I have two good hands with all ten fingers!), I had no idea what to do with a cobra should we get it out of the hole!  I felt fear running up my back, causing a strange tingling and rendering me nearly paralyzed with fear. I frantically called out to our male volunteers to come to the rescue, however, they were already at the building site, and couldn’t hear me.

Only a few more seconds passed before the snake managed to slide inside the hole of the home completely.  At that point the women shrugged and returned to their regular tasks.  I have no idea what the owner of the home would do about having a cobra in her home!

Shaken, I ran to find one of the men in our group to see if they could help. They seemed to be a reticent as I was, to go into a darkened home to confront an unknown snake. (These homes have almost no light).  Ultimately, everyone returned to the task of building the goat shed.

I was not feeling well myself that day, having awakened with a fever that morning. As the hours passed and the temperature climbed into the high nineties, I began to feel faint and so desperately started looking for shade. There are no trees in this colony, but they did have a tiny community center with a roof. Hoping no one would notice that I was slacking off, I slipped into the community shelter and sat down on an upturned bucket.

I soon realized that I was not alone. Across the small room was an elderly leprosy patient, squatting on the floor, with her arms cradling her stomach. She was rocking back and forth, wailing quietly in pain. I ran out to grab an interpreter. I learned that she had stomach cancer and had recently had surgery. Her stomach was swollen and distended grotesquely. The interpreter told me that this poor woman was in constant pain.

I immediately began digging in my purse to see if I by chance had any painkillers. I found a travel bottle of Bufferin. I was about to give her the Bufferin when I had a nagging thought that perhaps I should call our doctor before dispensing medicine!  I called our doctor, explained the problem to him and asked if I could give her some aspirin. He responded with a resounding “NO! If you do that, you’ll kill her.  She also has a bleeding ulcer!” Whew! Good thing I followed that small prompting! The thought of this poor woman fighting both stomach cancer and a bleeding ulcer gave me a deeper understanding of her distress. No wonder she was moaning and wailing!

Not knowing how else to comfort her, I also squatted down in the dirt next to her. I started to stroke her hair. Then I stroked her shoulders, sliding down her side to her feet.  (It was easy to reach her entire leg because of her squatting position), all the while singing simple Primary songs that my father used to sing to me when I was sick. Gradually the wailing stopped. She leaned onto my shoulder.

Not knowing what else to do, I kept stroking and singing. She closed her eyes and actually smiled as she rested against me. She lightly laid her hand on top of mine, following the strokes.

At one point the colony leader came in and I asked him if she was getting help in the colony. “Oh no,’ he said. “she is an old lady and will die soon anyway.”  Shocked at such a callous answer, I asked him how old she was. He replied that she was 54.

That hit me like a ton of bricks. I was also 54! All I could think of was how if I had stomach cancer, my husband would make sure I had access to the best doctors, the latest medicine.  I would either have care in a state-of-the-art hospital or would be lovingly cared for in my home. Tears sprang into my eyes as I pondered the injustice of this situation. What is it about poverty that makes life so cheap??

Soon it was time to go. I bade my new little friend farewell. Did I mention that I also felt much better by this time? So the healing went both directions!

The next day we returned with the colony’s new goats, to be introduced into their newly constructed goat shed. When this woman came to see what was happening, she immediately came over to me when she spied me.  She grabbed my hand in her own deformed hand and made motions for me to stroke her again.

Better than aspirin? I don’t know. But I know that there is power in loving touch. I have seen it work again and again.

In our families, we often have the opportunity to share that power with a child with a skinned knee, a discouraged teen or an overwhelmed partner. Kids that are hurting have an innate knowledge that they need someone to hug them. How many “owies” have we all healed with a kiss?  Somehow as kids get older, we tend to touch them less and less, even though their problems seem to get tougher and tougher.

I think it should be just the opposite. There is nothing like appropriate touch—a hand on the shoulder, a high five, a hand squeeze or a hug to give a struggling kid or spouse renewed confidence, renewed importance, and a sense that they can rise to their challenges. I can’t help but think of how the Savior used touch so often to heal.  Let us follow His loving example. Rather than diminishing touch as our children grow, let’s increase it to give them the power to handle their own increasing challenges. It’s free and it takes almost no time. Yet its rewards are amazing!

There are many, many languages and dialects spoken

If you LOVE Rising Star Outreach and are looking f

Why give now? ⭐ Because parents need medical car

Rising Star Outreach is informed by the belief tha