No Act of Love is Ever Wasted 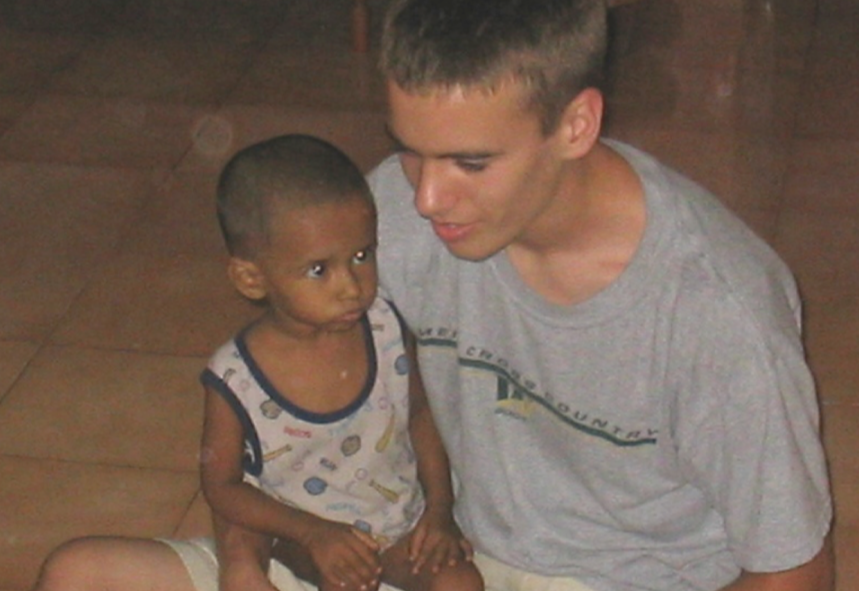 Written by Becky Douglas and originally appeared for Meridian Magazine

When my son Alex was fourteen, he traveled to India to spend his summer volunteering at Rising Star Outreach. This was in the very beginning of our service in India, before we had opened our own charity. At that point, we were supporting a toddler home named the Sangitha Home. It was quite a challenge –a home with ninety three-to-five-year olds!

The woman who ran this charity, Grace Moses, had chosen to concentrate on these ages because they had the most needs. The young babies were easily adopted to foreigners. The children older than five could go to school each day and so required less care. But very few people were serving the toddlers, because they required constant attention.

In those days it was very common to see children in very desperate straits on the streets of Chennai. One day, Gopi, our director, picked up a little girl about the age of two who looked as if she were dying. She was too weak to respond to him. Gopi somehow determined that her name was Rani. Gopi brought little Rani back to the Sangitha Toddler Home.

Rani was so emaciated from starvation that she threw up the rice that Gopi tried to feed her. He tried giving her bread, and again she vomited it back up. She had been without food for so long that her digestive system had shut down. Finally, my son, Alex suggested that they try giving her just the rice water—the water left over from boiling the rice. Alex had a medicine dropper in his suitcase which he ran to get. Holding her tenderly on his lap, Alex tried giving her just one drop of rice water at a time. It stayed down! He continued to feed her this way until the bowl of rice water was gone. Alex did this for a couple of days until finally Rani’s tummy reached a point where it could accept food.

Rani had apparently been pretty abused on the streets because she refused to let anyone come near her. She had taken a liking to Alex because he had so gently brought her back from the brink of death. So every day when Alex came to the children’s home Rani would toddle up to him and sit in his lap. He held her the whole time he was there. He would sing to her, talk to her, stroke her hair, try to play games with her. If anyone else came up to her, she would cringe and hide her head in Alex’s arms.

Those two little souls bonded so strongly! Every email home, Alex talked about Rani; today Rani smiled! Today Rani laughed! Today Rani let another child come up to join us! By the end of the summer they had become close friends.

Shortly after Alex arrived back home, one afternoon he was sitting at the kitchen table working on his homework when the phone rang. It was Gopi from India. Gopi was crying and seemed inconsolable, “Becky, our hearts are breaking in India today.” He went on to say that Rani apparently had a mother, because a woman had come to the home, announced that she was Rani’s mother and wanted to take her. She said that she had made a promise to her (Hindu) God that she would find her daughter and care for her. They tried to convince the mother to let Rani stay until she was completely healthy. They showed the mother how much progress Rani had made. But the mother was insistent. Gopi said sadly, “So she took Rani away.” He sounded heart-broken.

When I hung up the phone, Alex looked at me expectantly. He had been able to gather enough from my side of the conversation to realize the call was about Rani. “What is it, mom? What is it about Rani?” he asked anxiously. I explained as gently as I could.

Alex was terribly upset, “Mom, you have to get her back! She will die in that woman’s care! You had to see Rani when she came in. She was nearly dead.” I responded, “There are laws in India, Alex. I’m sorry, but I can’t keep a child from a mother who wants her.” Alex couldn’t believe it, “You mean, you’re just going to let her die?”

“My hands are tied, Alex. There’s nothing that I can do.”   Alex had begun to cry. He was hurt and angry. He said, “Fine! I guess I just wasted my summer in India. All I did was care for Rani and now you’re going to let her die.” I could feel his pain and wished that I could help. I sent up a silent prayer for guidance. Into my mind came a story about Mother Teresa that I had read in a magazine, years before.

The story was about a woman in London who was a great fan of Mother Teresa’s. I’ll call her Ann. Ann had saved her money so that she could go to India and work with Mother Teresa but when she got to the Home for The Dying in Calcutta, Mother Teresa wasn’t there. ‘Where is she?” Ann asked the nuns. The nuns told Ann that Mother Teresa was over at the infant center. They gave Ann directions in how to get there, and Ann scurried over there. She had waited so long to meet this woman!

Spotting the home, Ann stepped quickly inside and scanned the room for Mother Teresa. She was stunned at the sight that greeted her. There were hundreds of babies on the floor, many of them crying. There were six Missionaries of Mercy in the room, doing what they could to meet the needs of all these babies.

Mother Teresa was at the back of the room. As she came towards the door, she would stop and point to a baby and say to the missionaries, “This baby right here,” or pointing to another baby, “this little baby right here.” As she did that, one of the missionaries would quickly come up, pick up the baby and take it to a rocking chair. There were half a dozen rocking chairs against the wall. The missionary would then begin to rock the baby and sing to it.

As Mother Teresa came to Ann, she herself, picked up a baby and handing it gently to Ann, said in almost a whisper “And this baby is for you.” Surprised, Ann accepted the baby as it was offered to her. It was a frail little baby boy. By the time she looked up, Mother Teresa was gone.

A bit disconcerted, Ann asked the workers what she was supposed to do with this baby? One motioned for her to come and sit in a rocking chair. When Ann sat down, in broken English the worker said, “Mother Teresa has a very strong belief that no child should ever leave this earth without having felt the warmth of an embrace and human love. As you can see, there are more than 200 babies here. There are only six of us. There’s no way we can love on each child. It’s physically impossible”. 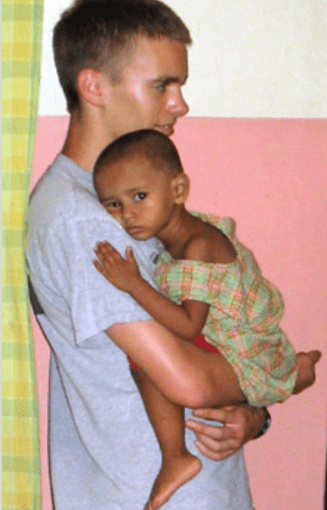 Reverently, she continued, “But Mother Teresa has a gift. She comes every morning. She somehow knows which babies will die today. She points them out to us. Our job is to love on these babies until they die, so that they can leave this world in love. You need to rock that little boy, embrace him and share your love with him.”

A bit bewildered, Ann began to rock the baby. She hummed the Brahms lullaby. She said she could never forget, how as weak as the child was, how he still pressed his little face into her neck in response to her touch. She rocked the baby until he died that afternoon in her arms. Her life was transformed by this experience.

She wrote, “I have friends who would tell me that I wasted that day because the baby died anyway. But I would tell you that this was the holiest day of my life. I learned this day that no act of love is ever wasted.” Ann said that this was a turning point in her life.

As I finished recounting this story, I said to Alex, “I believe also, Alex, that no act of love is ever wasted. Yes, Rani may die, heaven forbid. But she spent several months in our home where she was loved and cherished. It may be all that she takes from this life with her. Your time was not wasted.”

We have not seen Rani since that day. To this day I still subconsciously look for her whenever I’m on the streets of Chennai. I am fervently hoping and praying that the mother stayed true to her word and took Rani home to care for her.

We have been incredibly blessed by God at Rising Star to have now seen hundreds of little lives change for the better through our schools and children’s homes. But we are not always successful with every child. We had two children die last year. One young girl fell into a river that was swollen from a cyclone that was off shore.

She had gone home from our school for the summer holiday and had gone down to the river to bathe. She was swept away by the swollen river. Another child caught Spinal Meningitis and died in the hospital. These events would be unbearable if I couldn’t remember the wise words of Ann, when she said that she had learned that no act of love is ever wasted. Those two girls had been cherished and loved by so many at Rising Star Outreach.

We cannot control how much life a person is granted. But we can control how much love we share with that person. In the end, I believe that the shared love is the thing that endures beyond this life. I have had to bury both a beautiful daughter and a precious granddaughter. Both deaths would have been unbearable if I could not be comforted in knowing that many days and years of love were shared together and that they will be shared again. Because of our Savior and His marvelous atonement, love is eternal. Each act of love that we share with another becomes an eternal legacy of our lives.